The stunning variety of distinctive cuisines available in Macao - Portuguese, Chinese, Japanese, Indian and so much more - makes this international city a veritable paradise for foodies. With an increasing number of restaurants to choose from, there is something to please every palate. And in addition to a choice of international mainstream wines and spirits, the intrepid bon vivant can find many superior and reasonably priced Portuguese wines that are now emerging onto the international stage. 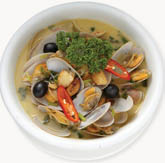 This dish is closer to fried clam soup than Korean stir-fried dish with chili paste dipping sauce. The clams are fried with olive oil and then boiled with white wine, garlic sauce and lemon juice. It boasts the unique taste of clams and flavor of olive oil, while it is also infused with the aroma of wine, adding complexity to the dish. 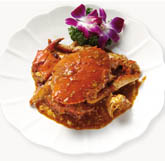 Crab Curry uses a whole Vietnamese mud crab. It’s one of the most expensive Macanese/Portuguese dishes and is also a dish which has been heavily influenced by India. Its unique spices and creamy coconut milk sauce combined together to deliver a superior taste. Usually, it’s served in big portions, so it’s better to order it when eating with 2~3 people. Enjoy the crab meat and mix white rice with the curry sauce! 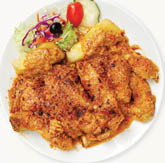 A traditional Portuguese dish of grilled chicken topped with piri piri sauce, which is a mix of pepper and herbs and has its own unique taste. The cooking style varies according to the restaurant, with some places having a slightly spicy curry sauce than the true piri piri, and some places pouring the sauce on top of the fried chicken 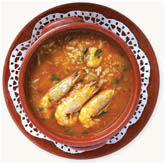 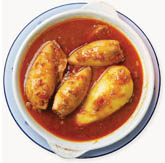 Portuguese sausage chouriço, onion, garlic, minced meat and egg-whites are all mixed together and stuffed inside the squid, which is then topped with tomato sauce. It’s quite a delicacy! 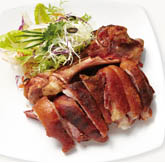 This is the best Portuguese pork dish. Its crunchy skin and lean meat creates a whole new taste sensation. 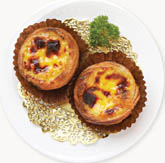 Though this dessert originated in a monastery in Portugal 200 years ago, it became popular only after it arrived Macao. The egg-custard stuffed pastry with a bitter caramel flavor really captivates everybody’s soul. 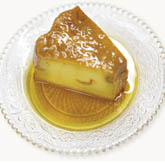 It’s not fancy and is just a light pudding, but it does the basics well. If you spread caramel on the outside, it becomes akin to caramel custard. Depending on the sauce, you can also make various changes. 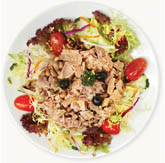 The traditional Portuguese salad is tuna with vinegar-cured chickpeas, all mixed together, while the traditional Macanese salad is tuna mixed with vegetables. The sauce used tends to be olive oil, slightly seasoned with salt. Canned tuna is most commonly used, but, in some high-class restaurants, fresh tuna is chosen for its freshness, and it does indeed means a huge difference reflected by your taste buds.

Chinese dishes can often seem never ending in their diversity and imagination. There is a saying amongst some parts of China, that Chinese people eat anything that flies - except planes; and anything that has four legs - except tables. 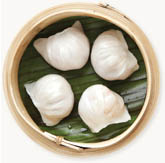 A chewy half-transparent cover filled with shrimp and pork. You will be surprised by the size of the shrimp and the sweet juice which oozes from the shrimp when you chew on it. It’s one of the most popular Cantonese Dim Sum dishes, with a taste you can never forget. 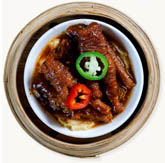 Chicken feet boiled with Cantonese sauce, which are full of fruitful collagen; it has become popular among female travelers recently. 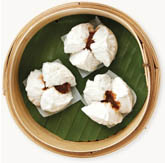 This Dim Sum has a thick outer layer, akin to steamed buns, and is stuffed with a sweet pork filling which has been boiled in soy sauce and sugar. As it’s bigger in size than other Dim Sum, it’s particularly popular with those who prefer to travel on a full stomach. 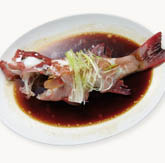 This is Cantonese-style steamed fish. Pour hot oil over a slightly cooked fish to make the outside crispy and then add a dash of special light soy sauce. You can eat the meat with the soy sauce and enjoy the flavor of clear spring onion from the soy sauce. 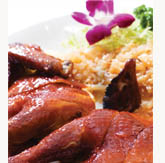 This is Cantonese-style crispy chicken. A boiled chicken is marinated in starch syrup and has boiling oil poured on it to make the skin turn nice and crispy. If you are a fan of chicken dishes, you will definitely enjoy it. 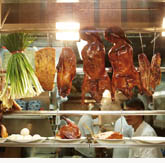 This is one of the best Chinese poultry dishes, together with Beijing duck. It’s boiled goose marinated in starch syrup, done in the same cooking style as with Deep-fried Crispy Chicken mentioned above. However, roasted goose is cooked first over a wooden fire, sometimes even up to three times, with sauce being applied in each time. This makes for an extraordinarily special texture for the fully marinated meat. 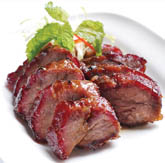 It’s skewered pork barbeque. After grilling, apply malt to give it a gloss, and use a torch to heat it once again. It’s a humble meat dish with a sweet and smoky flavor. 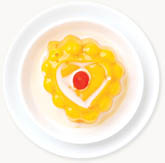 Normally it’s called Sago. It’s a dessert with mango juice mixed with coconut milk and grape fruit pulp and various sliced fruits, eaten with a spoon. The taste varies by restaurant, with some places adding a lot of coconut milk in to enhance the smoothness and some places adding sour fruits like pineapple to make it more refreshing. 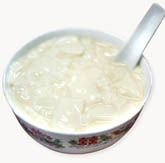 Find the real taste of Macao at the corner of an old snack shop or somewhere on the street. Leave your stomach empty and peer into the alley. 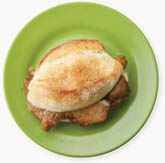 A Macao-style burger in a crispy baked baguette with thickly sliced grilled pork meat in between. It is different from a regular hamburger as it doesn’t have vegetables or sauce, but just meat to enjoy the taste, and the grilled charcoal flavor on the pork is a great combination. 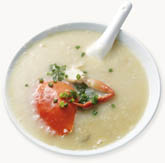 Porridge is a favorite breakfast among Macao locals and Chinese people. The most common dish is white porridge, but depending on what is inside, it can also be a high quality dish. The most recommended one is the porridge with fresh water crab that has a whole crab inside. Just like the Chinese saying ‘You can eat a cow secretly but you can’t eat a crab secretly’, the flavor and taste of the crab inside the porridge is outstanding. 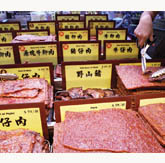 This is one of Macao’s specialty snacks. There are various types, from beef, chicken and pork. 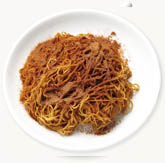 It’s dried noodles slightly fried with sea shrimp roe and mixed with egg noodles. The shrimp roe are too small to chew but as it breaks down between the teeth, the flavor is surprisingly strong, so that you can taste the salty sea in your mouth, even with a small amount. It is best with egg noodles that are as bouncy as string instruments. 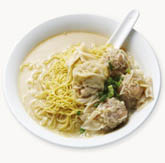 This is a well-known noodle dish called Wonton noodles. Yellow chewy egg noodles with small shrimp dumplings and the tasty soup made of boiled dried fish attracts the travelers with its taste. 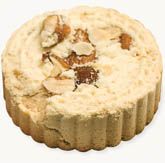 These are some of Macao’s most popular traditional cookies. They have a lot of almonds, meaning every bite is crunchy, but it’s recommended that you eat it with a drink because it’s dry. 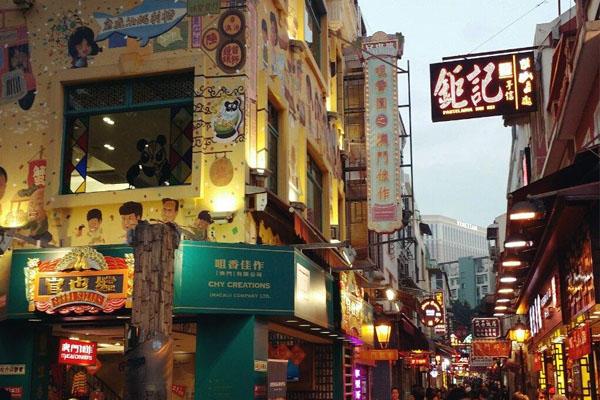 Location: Rua do Cunha, Taipa
Renowned far and wide by foodies, this tiny street nicknamed "Food Street" offers the snack-happy explorer a delicious trip through Macanese culture, from its authentic Portuguese restaurants to its beloved Chinese cookie and jerky shops. As locals and frequent visitors happily attest, you'll know when you're close – just follow your nose!